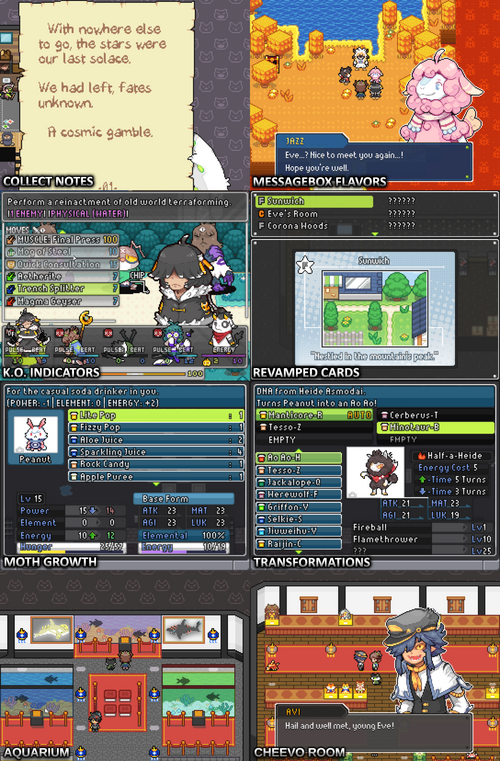 Hello to both new and old followers! We’ve got a big batch of updates to show off this time around. Some things have already been talked about in past entries, but we’ll go into detail with how some things have been re-worked since then:

Collect Notes: Doing Choi’s cluster quests will know grant the player “notes” which are keys behind the world HEARTBEAT presents. Besides having lots of characters to meet, there’s also lots of lore for the player to dive into.

Messagebox Flavors: Upon starting the game, or accessing the options selection, the player can now change the look of the messagebox any time. There are currently 8 to choose from, including the default.

K.O. Indicators: Just as it says, there is now a way to see if an actor has been KO’d. We finally got it to work properly, since the moth battle transformations were making it weird a while back.

Revamped Cards: Besides the cleaner look, cards now have updated information. Certain card packs will also be shuffled around since more cards have been added to the card repository due to new areas, enemies, and NPCs.

Moth Growth: Enemies will now drop food that will affect growth. POWER is attack strength, ELEMENT is elemental rate, and ENERGY is how long your moth’s transformations last in battle. You can also buy food later on in the game from a certain cabin in a later forest.

Transformations: These can be collected by progressing through the story, via alchemy, buying them, or under special conditions. Each transformation has different stats and moves. Collect them all!

Aquarium: As requested, any fish that the player hands in to Fang will be viewable in this special area. It is located shortly after the demo, so it’s not too far off! Something special happens if you turn in all the fish Fang will ask for.

Cheevo Room: This area is located in the same place the Aquarium is. Only a few trophies are collected by playing through the story, so explore as much as you can!

Ailments & Elements: Statuses have been tweaked, some completely redone or swapped. Each element has an associated status. Character and enemies associated with said elements are now immune to their respective status. 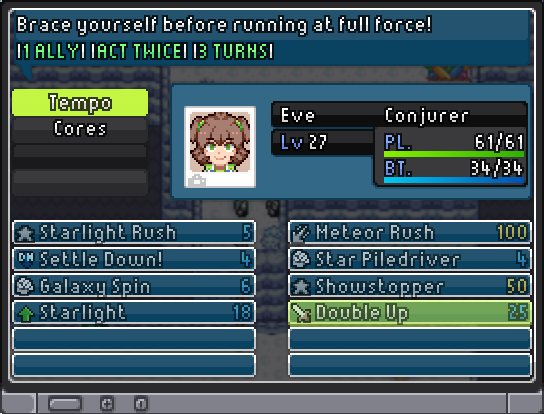 Skillset Update: Skill formulas have been completely overhauled, they’re much more methodical and should be better balanced overall as a result. Klein’s SCAN ability has also been re-implemented, allowing you to see each enemy’s stats and elemental weaknesses.

Demo Save File: Since many new things have been added for the beginning of the game, we’re thinking of having it where transferring your old demo files now gives you access to New Game+ instead. You will retain the tickets you collected which means you will still get the bonus rewards you’ve earned.

Battle Loot: Enemy material drops have also been changed, so they’re now done according to the enemy’s element and “rank.” This way, finding things for alchemy isn’t as difficult as it was before. Drops are now also visible as you beat an enemy.

Other News: On top of all this, we’re currently doing a third run-through of dialogue cleanup, and finalizing enemy balancing according to difficulty. Besides these tweaks, eventing is mostly done, save for one last quest.

Thank you for your patience, everyone!

Play as Eve and explore an odd world full of magic!

Tried the demo and I can't for this to come out; the art, storyline, gameplay and music are amazing! I hope this is released soon.

One thing though - does the demo just stop at a point in the story because the game closed on me at the gnome tunnel and I don't know if that signified the end of the demo or if something went wrong.

I have a question
this game supposed to have multiple endings isn't ?
so... that's means it will have choices to make in certain points or something ?

by the way it's look really amazing.

Sorry for the late response, radek!

Yes, the game is meant to have multiple endings, but it is determined by how you act towards the end of the game and whether or not you fulfill Choi's cluster quests, not so much a dialogue tree thing ^^;

Thanks for checking us out!

the art style, the characters, the jokes, the gameplay, EVERYTHING IS SO GOOD!

While the text has been replaced for easier reading (for non-English speakers), the spirit is still there. We've gotten good feedback so far from play testers, so we're confident that the full game will be a much more rich experience than the demo provides.

We're just as excited as you are!

that game is aweasome, I really liked it I cant wait until the game be completed

This update looks awesome! The text styles are so cool!
I really like the idea of a New Game+ too. With so many new things it's always better to start a new game but if you are farther along the game this can be a pain.. >_< lol

Yeah, plus, we've changed all the dialogue and the story flow, so a New Game+ would probably be better at this point... The demo only covers a little bit of the game anyway... despite how long it seemed.

We're at the point in development where it's mostly just fixing up database numbers, so release is imminent!